One of the more interesting economic debates in the past couple of decades is why the economy is slowing down.
Since 2000, per capita GDP growth in the US has been 0.9 percent per year, compared to 2.3 percent per year in the previous fifty years. This is a big difference: at 2.3 percent growth we double in wealth every generation. At 0.9 percent it takes us close to a century to double. So why the slowdown? 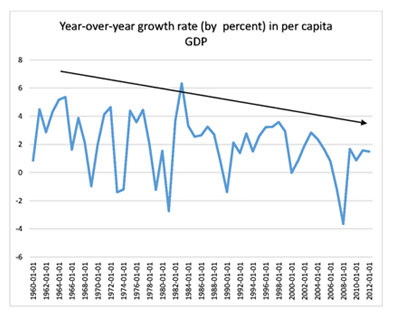 Even fresh young blogger Ben Bernanke’s in on the game with his new blog, while Tyler Cowen has written a minibook on the subject, called The Great Stagnation.

One thing that most economists, left and right, agree on is that it takes investment to make an economy more productive. So, naturally, economists focus on investment rates. Which have indeed come down, across most of the industrial world, mirroring the US numbers above.

Misplaced Fears of Hoarding and Deflation

To Keynesians, any problem is a demand problem — it’s their one hammer to solve them all. So the position of Bernanke, Summers, and the ever-present Krugman is, with minor adjustments, that there’s too much savings sloshing around in this world instead of being invested. That savings acts as a deadweight on productivity improvements.

“Savings” for both Keynesians and Austrians means the money not spent on consumption. But Keynesians miss that you can do two very different things with savings: you can hoard it, or you can invest it. Hoarding means you secret it away, which terrifies Keynesians. Investing means you indeed spend the money on some productive good or service.

When the Keynesians complain about dead money, they mean there’s too much hoarding. But this completely misunderstands how hoarded savings affect investment. A dollar that’s unspent is equivalent to temporarily removing that dollar from existence. You may as well have buried it. This means that all remaining dollars increase in value.

To illustrate, let’s say you’ve got $100 billion running around the economy, and you burn $25 billion. What happens? The remaining $75 billion do the work of that original $100. Meaning each dollar rises in value by 33 percent. Now, if instead of burning that money you hoard it instead, the impact is the same: the remaining dollars in circulation rise in value. You get deflation. You still get your $100 billion spent, it’s just being accomplished with fewer pieces of paper.

So hoarding merely transfers purchasing power to dollars still in circulation. Meaning that Keynesian bugbear of “savings gluts” have no impact on investment. Because hoarding cancels itself by purchasing-power adjustment.

The Role of Regulation

So what is causing the slowdown? Cowen, who is among the few mainstream economists actually trained in Austrian economics, gets closer to what I think is the true cause, when he looks at supply-side problems. Still, I think he’s missing the obvious. Cowen claims that we have plucked the low-hanging fruit — excess land on the frontier, basic education of kids — and now we just have to suck it up and get used to the new normal.

The problem here is the timing. The frontier “closed” over a century ago, actually before the greatest leap in US economic growth (the “Gilded Age”). Literacy rates, too, leveled off a century too early. I suspect a statistical analysis would say that, by sheer coincidence, the exact opposite occurred: economic growth soared once the frontier closed and literacy rates leveled off.

So what is the cause of the slowdown? Well, we need something that actually occurred in the right timeframe. For me, the problem is pretty obvious: creeping regulation. It’s hard to quantify the impact of regulations: how do we measure a regulation against, say, selling street food or braiding hair without a license? So we need to use proxies.
Here’s a chart of the annual number of pages in the Federal Register. This is a proxy for how many rules come up, which is in turn a proxy for the regulatory burden. These took a huge jump starting in the 1970s, briefly interrupted by Carter’s deregulation drive, then resumed their march upward from the 1980s. 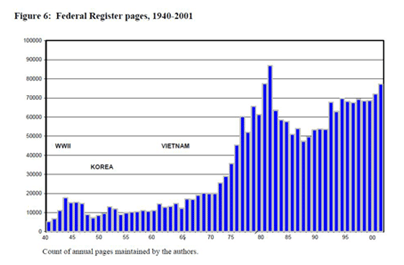 Comparing the productivity numbers to regulatory pages matches up pretty well: pre-1971 real GDP ran at 2.4 percent. Since 1971, it’s run at 1.8 percent. Still, the big drop-off since 2001 isn’t simply explained by pages — there was no big jump in 2000 in Federal Register pages.

So the timing’s not perfect, but there are other comparisons we should make as well. Specifically, we need to look at other countries because our view of the causes of the slowdown will change depending on whether or not all countries are experiencing a slowdown, or just certain countries.

In both the Summers-Bernanke-Krugman savings glut theory and in the Cowen low-hanging-fruit explanation, they are proposing something that should be affecting at least all rich countries. In the regulations explanation, we’d expect different harm depending on the regulatory zeal of particular countries.

The data supports the country specific — regulatory — explanation, simply because there are still rich countries that are growing. The slow-down’s not affecting everybody. Here’s a chart of performance during the so-called stagnation of the top five countries in economic freedom, ranked by Heritage’s 2015 Index of Economic Freedom: 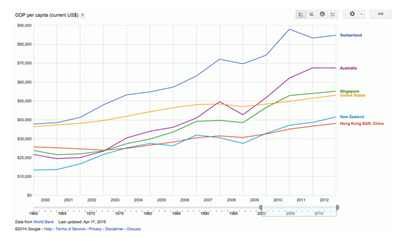 Most interesting are the three countries that actually passed the US during the supposedly world-wide stagnation: Singapore, Australia, and Switzerland. Singapore only passed the US in per capita income in 2011, Australia in 2010, and even Switzerland was at the same income as the US in 2000 — and now it’s nearly 50 percent richer.

So what’s so special about these countries? In general, there’s almost nothing that, say, Australia, Singapore, and Switzerland have in common — language, size of country, resources, structure of economy, type of government. What they do have in common, though, is low regulatory burden, limited governments, rule of law. In fact, both Switzerland and Singapore are regularly threatened by the US as tax havens.

If, indeed, it’s this relatively business-friendly attitude that lets some countries escape the supposed Great Stagnation, we have yet another reason to doubt the policy prescriptions of the Summers-Bernanke-Krugman position. Rather than the expanded government role in lending, or Cowen’s pessimism, the solution is clear: put as much effort into removing regulatory and tax dead-weight as we put into hatching new burdens.

Comment by R. Nelson Nash – The hidden agenda of Keynesians is that they do not want you to “control the banking function” in life at the “you-and-me level.” They want it to be done through central power of some sort that complies with their theories. Hence, they use derogatory terms that infer “hoarding.” When you use Dividend-paying Whole Life Insurance as your Warehouse of Wealth (really your medium of exchange), Keynesians don’t recognize that the money is always at work at all times.

On the other hand, they may know it — but this fact doesn’t meet the goals of their agenda. I suspicion that this thought is closer to the truth.