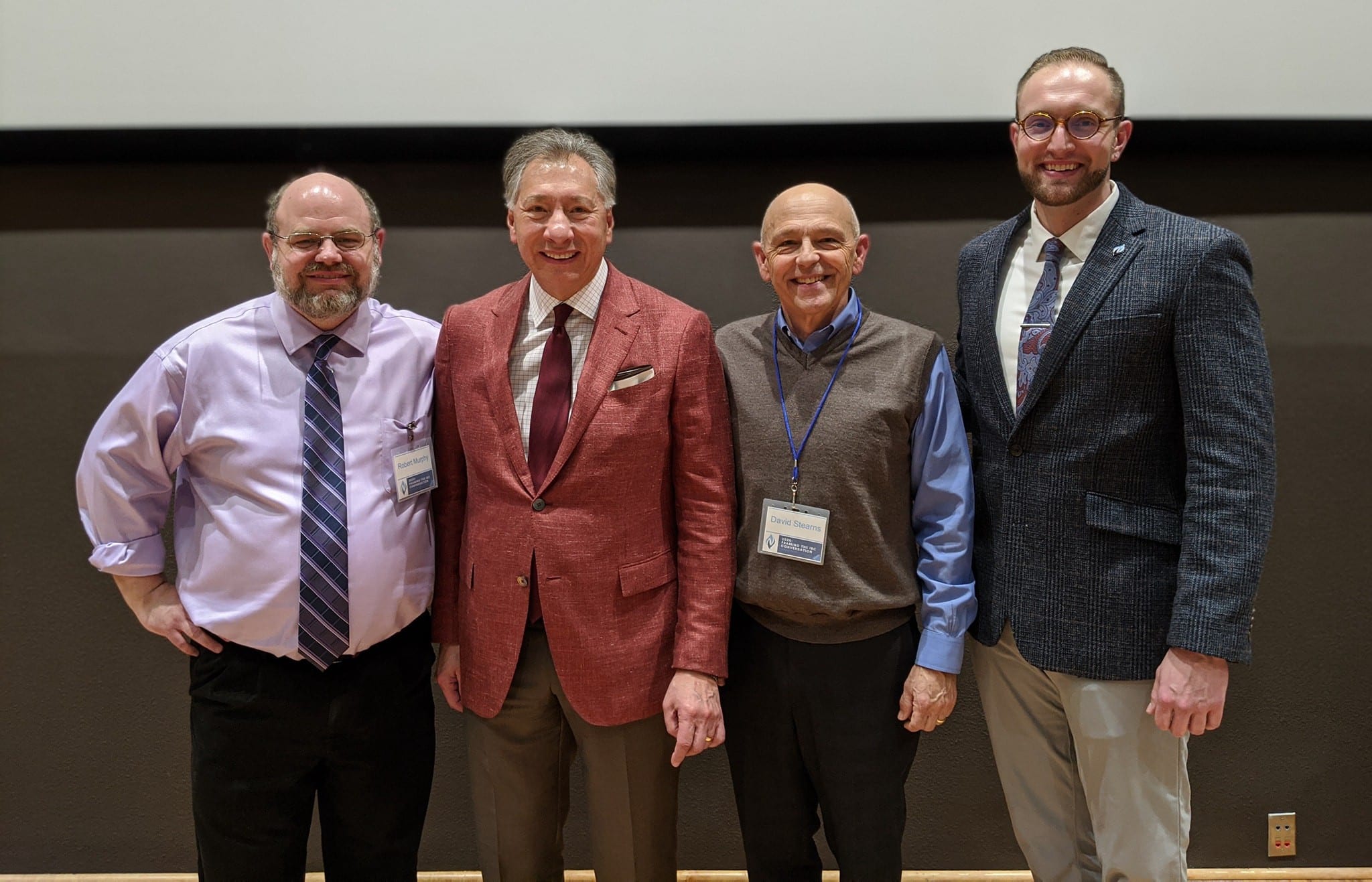 From left to right: NNI Board Members Robert Murphy, Carlos Lara, and David Stearns; and myself — upon the conference conclusion on Thursday, February 6, 2020.
Every year, Infinite Banking Concept (IBC) Practitioners authorized by the Nelson Nash Institute (NNI), and their guests, gather in Birmingham, AL for the Think Tank. The central fixture of each of these conferences has been the man who discovered the IBC himself amidst the tragedies of a brother’s early passing, a robbery, and a severe, unexpected medical diagnosis: R. Nelson Nash.

February 5–6, 2020 was the first exception, and the hard beginning of a new rule.

On March 27, 2019 — not two months after that year’s Think Tank — Nelson graduated. Things didn’t feel the same this time as we shuttled downtown late Tuesday morning. Though attendance this year would be the greatest in eight years, this one man’s absence was obvious and painful.

But though the man was not with us, his spirit was.

Members of the NNI Board of Directors and selected Authorized IBC Practitioners delivered two day’s of 50-minute talks inspired by that spirit. Carlos Lara was intimate and transparent as he shared his conviction for continuing the work Nelson that began, despite incredible challenges of his own. Robert Murphy gave us the basics of Austrian Business Cycle theory, connected it historically and presently, in order to show just how imminent the end to this country’s longest-ever economic expansion likely is. David Stearns got personal retelling stories of gentle, yet firm admonition from his eminent father-in-law to pay more and more premium as his family expanded. I can’t imagine that launching this year’s meeting in the first half of day one was easy. That’s usually when Nelson would either speak, or make his first appearance. But the three did it anyway, earning deserved commendation.

The second half of the first day and almost all of day two consisted of “break-out” sessions. Attendees had the option to choose from one of two simultaneous talks from Practitioners or representatives of the few life insurance companies that actively support the IBC. Each Practitioner, in their own way, addressed the theme “Framing the IBC Conversation” — the purpose embedded in which was an admonition to return to our roots. The ever-rising flood of noise and dis- or misinformation metastasizing through the blogosphere, YouTube, and the podcasting wild west demanded it. In this one attendee’s view, some struck the target and others did not.

Talk topics included marketing methods, educational processes, the noise, technology, and anecdotal success stories. A very few, unfortunately, took the opportunity to promote other programs and training, but fortunately, were relatively inconspicuous. On net, the impressions I gathered would be classified appropriately as excited, intrigued, provoked, encouraged, and motivated.

I’ve previously called this event “the cutting edge of finance.” Nothing has changed.

Prospective, current, and future dues-paying members of the NNI can catch what they missed on the Institute’s website — a valuable and growing reason, in and of itself, to consider membership.

One of those recorded talks is Jeff Deist’s, President of the Mises Institute, colleague of Bob Murphy’s, and friend to the late Nelson Nash. Jeff offers a refreshing alternative to the contemporary dialogue between Left and Right — that is, of varying degrees and locales of always and ever-more political centralization. That contrast is in the form of the “Small Revolution,” or in other words, radical decentralization. Maybe breaking up the dramatically under-representative “United” States wouldn’t be so bad. After all, why should San Francisco’s Nancy Pelosi have anything to do with the abortion policy in Auburn, Alabama? Conversely, why should Sen. Rand Paul’s view on the Second Amendment impede Californians from mass disarmament? 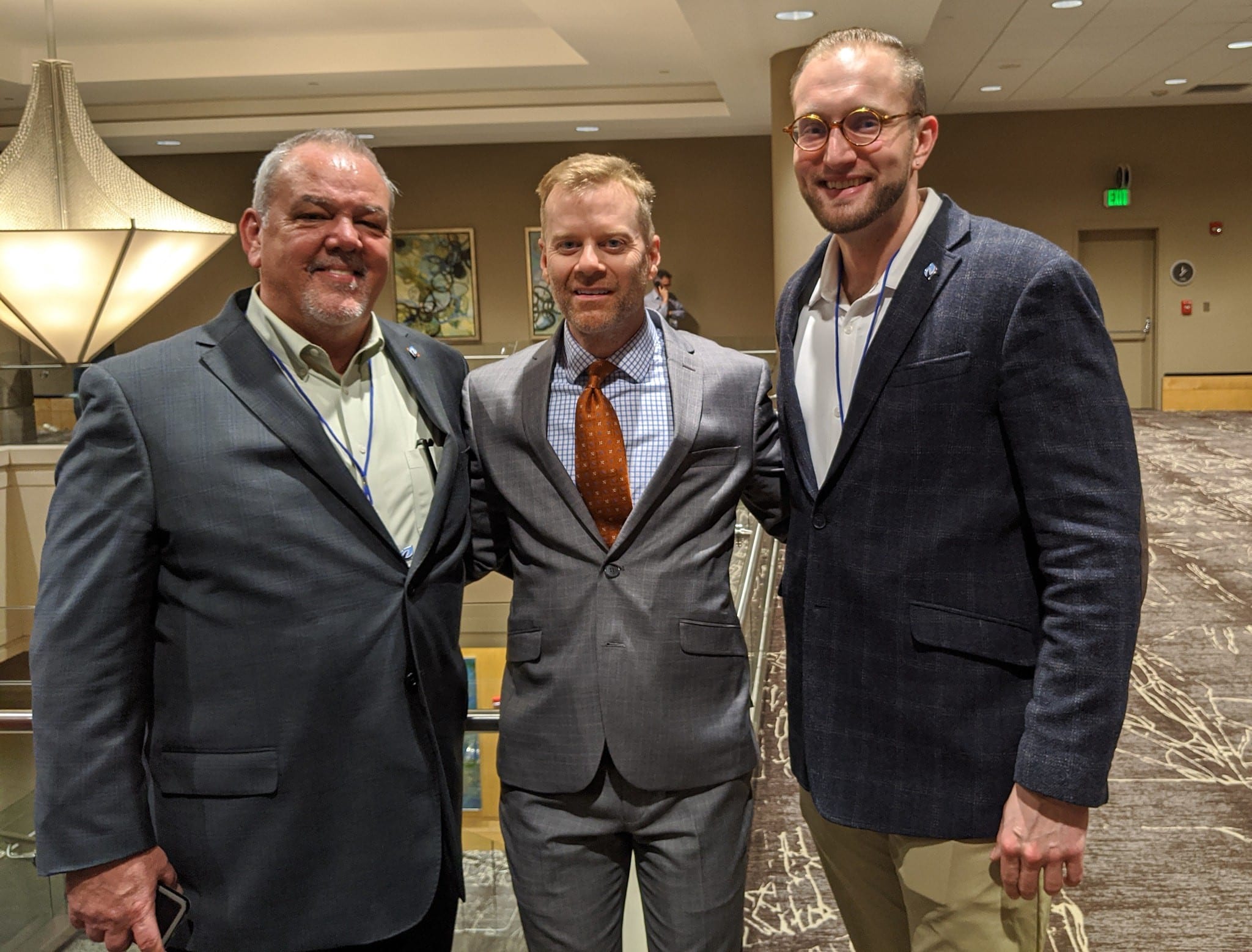 From left to right: James Neathery, Jeff Deist, and myself. Taken on Wednesday, February 5, 2020 after Jeff’s Key Note address.

The classic American ideal of secession — of severing legally binding chains — and Jeff’s support of it rang harmoniously with the crowd. However, it’s still clear that Nelson’s vision of bottom-up, individualistic, financial secession is still misunderstood in the broader, liberty-friendly, scholarly and policy spheres. For many in the Austrian, or free-market, or libertarian circles, the idea of accumulating capital in a US Dollar denominated asset seems unwise, given the potential for future currency collapse. The idea that “banking” is an ever-marching, uninterrupted process regardless of the particular currency in which elements of it may be denominated has yet to sink in.

Financial theory is one of the least understood sub-fields of economics. Do currencies play a role? Of course. But as our little field develops — perhaps with the help of a reappraisal of Austrian Capital Theory — we may come to see that it’s less about the unit of measure, and more about the relationship between inputs and outputs, the behavior of the individual, and inherent, unalterable, God-given relationships.

Nonetheless, Jeff was the man for the hour and closed day one better than I imagine any other Key Note speaker would have.

The highlight for me — my own talk aside — was that of the man I’m blessed to call my mentor, business partner, and podcast co-host James Neathery. James’ characteristic, free-flowing, authentic, and — understandably — emotional presentation attracted a standing-room-only crowd. A new Practitioner exclaimed in confession during the Q&A period that he had unintentionally drifted into the noise that James so masterfully called to the carpet. One of my favorite (paraphrased) lines — there are many — from James was:

If you have to run 50 credit card payments through third-party software in order to convey the power of the Infinite Banking Concept, then you do not know your subject well enough.

It’s a bold claim, indeed, and one that James is uniquely positioned to assert. For that one audience member, though, the theme of James’ admonition seemed to hit home.
Two weeks before the Think Tank, David Stearns invited me to speak. Of course, I agreed. On day one of the conference, I learned that the schedule had been shuffled. Rather than present opposite a simultaneous breakout speaker, I would address the whole group. About 45 minutes prior to my appointed time, I learned that the location for my talk, which would be the conference’s last, had been moved from the smaller breakout room to the main stage. 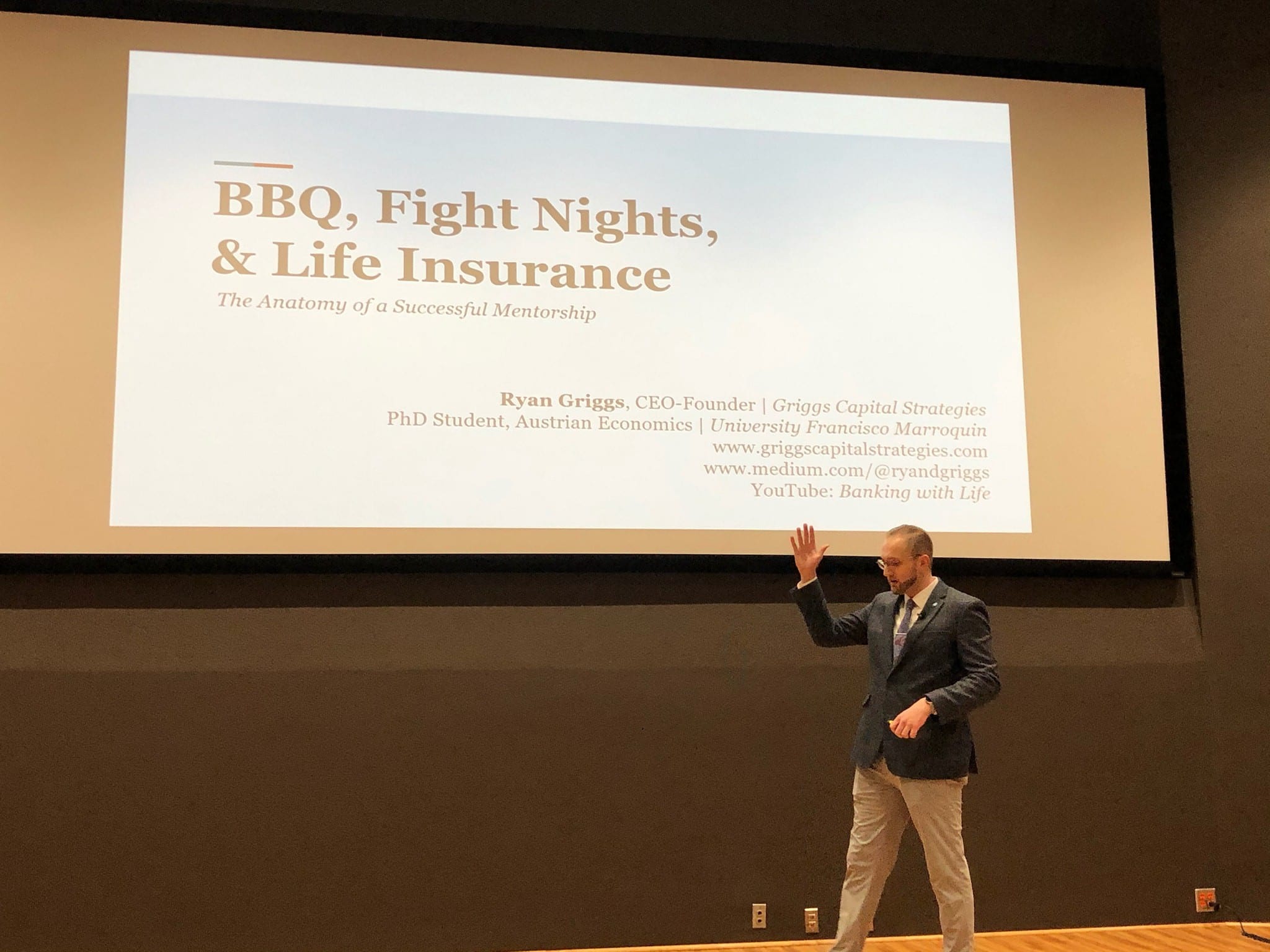 Me in action during my closing talk.

My idea was to present and explain a few fundamental elements of mentorship that all current and perspective mentors and mentees — in this case, within the NNI — could and perhaps should consider in their own mentoring relationships. “BBQ, Fight Nights, and Life Insurance: The Anatomy of a Successful Mentorship” was the “provocative” title — according to Bob Murphy who introduced me. Relying on my experience with James as a mentee and my experience with my partner-agents as a mentor, I wanted to lay out what was absent when I first joined the NNI. Back then, I knew the logistics ranging from when I’d take the exam, when I’d be interviewed, and when I’d be paired with an experienced NNI Practitioner. But I didn’t know what I could or should expect beyond that.

Since the presentation will be available to future mentees and mentors, I hope that problem is at least partially rectified. I will have the footage to do with as I see fit myself. However, as a number of audience members remarked after the talk, some of the details were complex and may require a second or third watch in order to fully digest (one audience member said he wished he could “hit pause” at various points). I may have to modify and expand on some of the subject matter in order to make it palatable and available for general consumption — I’ve yet to sort that out. I did pour it on, on purpose, and seemed to hit my mark. A surprising, enthusiastic, lengthy standing ovation suggested as much. 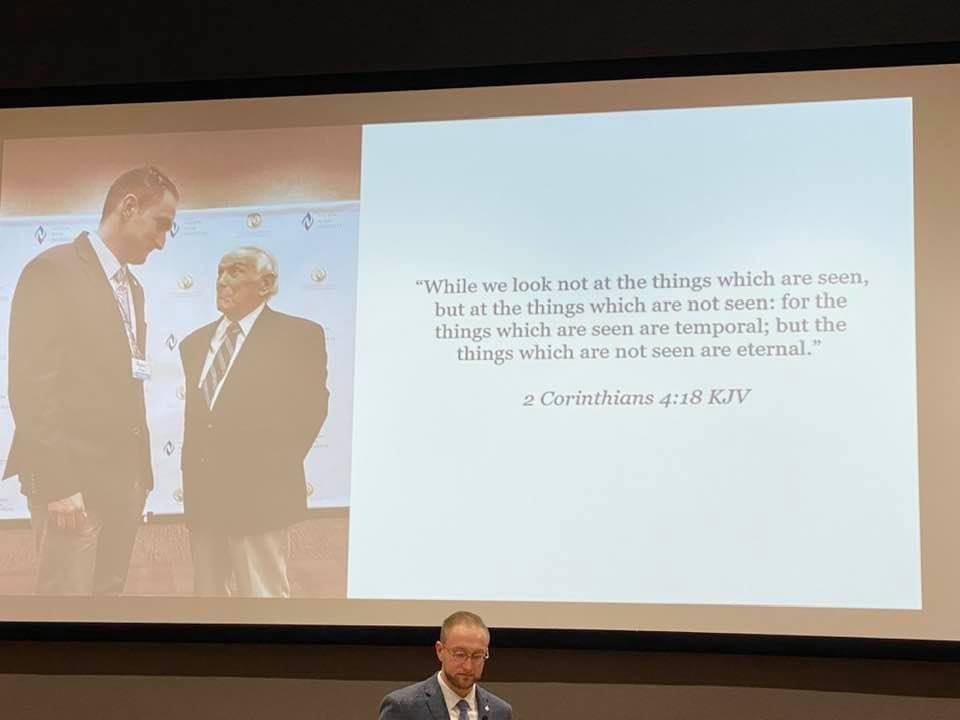 Me and my closing slide.

I closed where I and I hope Nelson Nash would want me to — by looking boldly to what’s to come. Whether the rush to understand and implement the IBC is prompted by the oncoming economic correction, or by the organic, already unfolding expansion and intensification of interest in a new, more sense-able financial paradigm, the flood is coming. In the Practitioners’ world, there’s really no such thing as inter-adviser competition. With an American population of approximately 360 million, 40–50 million of which, if not more, who are strong candidates for the IBC, the idea of “market penetration,” much less “saturation,” is comical. The problem is the inverse. It isn’t that there are too few consumers, but too few advisers.

As the theoretical economic rationale for a capital-centric financial strategy rises from the ashes of neo-classical and post-Keynesian financial economics, as more and more share the 92-page classic Becoming Your Own Banker, and as economic reality collides with dishonest, immoral, elitist financial scheming, many will come. Thankfully, those who aspire to help those who discover their dramatic, intense need for capital, have a place to come, to refresh, to connect, and to reengage.
Maybe I’ll see you the next time we go that place in Birmingham, AL at the annual Nelson Nash Institute IBC Think Tank.

“Banks lend money that does not exist, and that is evil.” — R. Nelson Nash

This article was originally published on Medium.com. Read the original article.
View All BankNotes Articles
×