As we discussed back in Lesson 6, most all products begin with engineering. In the life insurance business, the engineers are actuaries. They are dealing with a field of ten million selected lives – persons that have been through a selection process. I would not be one included in this field since I’ve been through heart by-pass surgery. And they are dealing with a theoretical life span of one hundred years.

Your are looking at a graphical representation of a 1958 Commissioner’s Standard Ordinary mortality table. 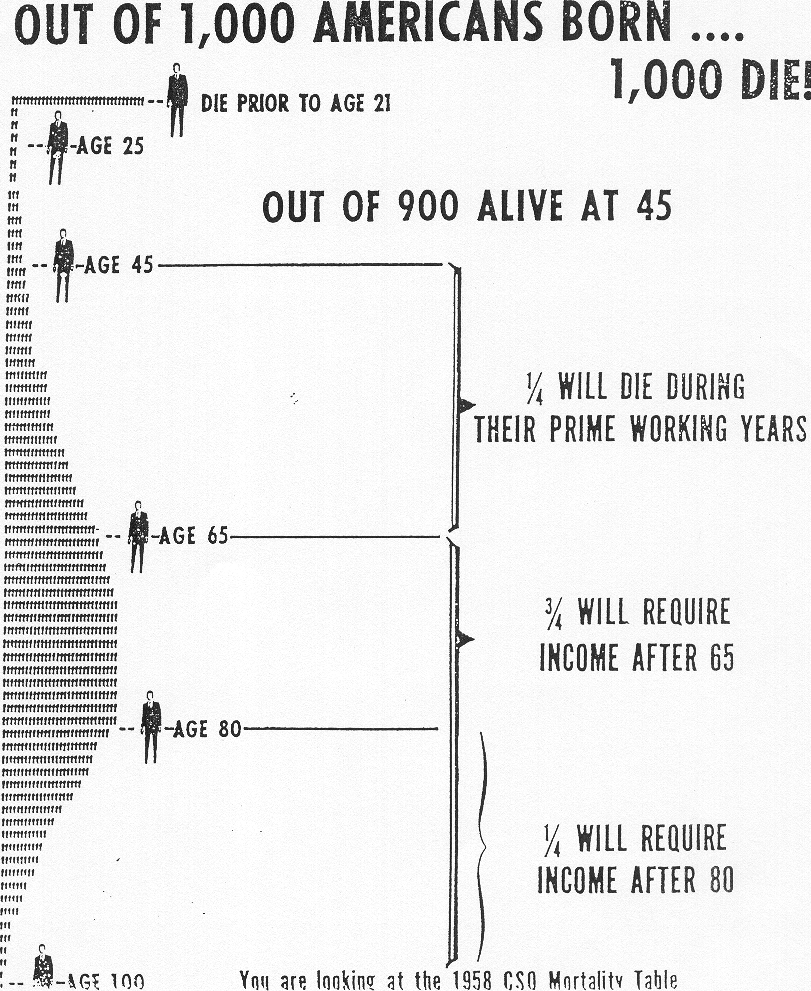 A word of caution is necessary here – most people will react with a question like, “Why are you showing me a table from 1958 – that’s ancient history!” You need to understand that it really doesn’t matter all that much when you are dealing with a mutual life insurance company. All you need is a “starting point.” If mortality experience has improved, then dividends will go up, giving you the effect of a current mortality table at all times.
Even in 1958 you will notice that, out of 1,000 born, only 100 had died before age 45. I went to my 50th high school reunion four years ago and our experience was much better than that. Out of a class of 230, only 16 had died and two of them were in a car wreck when we were still in school. Life expectancy has improved dramatically in the past 60 years.

This should be a good place to ask a question – where did this idea of retiring at age 65 come from? From all that I can gather it all started with the Germans during the time of Bismarck. These were the folks that gave the world the idea of Social Security. This is where President Franklin D. Roosevelt got age 65 for retirement purposes. I believe that life expectancy for American males in 1937 was in the neighborhood of age 61. Now, expectancy for males is past age 75. And we are currently using age 67 as retirement time!? It will never work! With increasing longevity, can you picture a situation where one plans to work for 40 years and retires for 45 years? Get real! There is no way that this can happen!

The coming collapse of Social Security is the natural result of operating from a faulty premise. There is no legitimate reason for using such fallacious thinking to plan your financial future. I once read a story about John Templeton, creator of The Templeton Fund, who “retired” at age 80 and is now doing only charitable work (and working harder than ever). He made the observation that all should plan on working to at least 70 before considering retirement – that under our current thinking the most productive years of life are being wasted.

Furthermore, it is easily demonstrable that all Socialist schemes eventually fall apart. There has ever been an exception. Just a thought to consider – the Soviet Union lasted about 70 years and it became unraveled. The great Austrian economist, Ludwig von Mises, explained over 50 years ago that this would happen. And now, remember that the U.S. Social Security program started in 1937. Add about 70 years to that date and watch that thing come apart!

There is no money in the Social Security “Trust Fund.” That money has already been spent and replaced with worthless IOU’s. Everything is predicated on the government’s ability to extract money from future generations. According to an article in the May 1997 issue of Nation’s Business, in 1945, there were 42 workers supporting each recipient of Social Security. In 1996, only 3.3 workers were supporting each recipient. By the year 2025 the ratio is predicted to be 2.2 workers per recipient.

In addition to all the other warnings about the coming implosion of that abominable Social Security idea, please tell me how anyone can expect my last example to exist in 21st Century America! There is no way that it can happen!! You can take steps to avoid all this by contracting with other like-minded people to solve the problem. It is called Whole Life Insurance!