To demonstrate what we learned in Lesson 8 about how to design the policy best suited for “banking purposes” consider the table shown below.  Here are twin brothers, age 25 and each has decided to put $2,000 per year into whole life insurance.  Twin “A” decides to put it all in Ordinary Life.  Refer back to the scale on page 38 [BYOB] and find where this is located.

Twin “B” puts $1,200 into Ordinary Life and puts $800 into a Paid-Up Additions rider with the same insurance company as his brother. 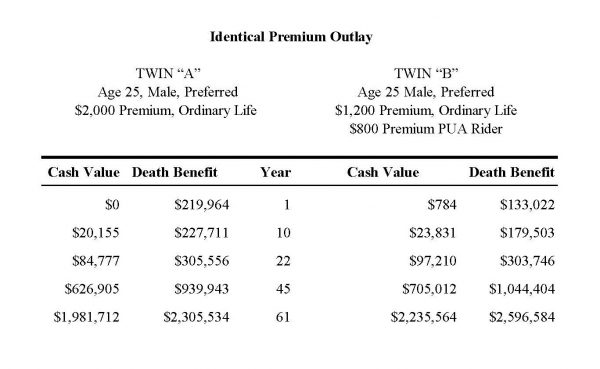 Notice the difference in results over the period shown.  At the end of the first year there is a difference in death benefit of about $88,000.    “A” has no cash value and “B” has $784 – all of which is the cash value of the Paid-Up Additions rider.

Question:  Refer back to the mortality chart in Lesson 8 and tell me what the probability of death is for either of them at age 26?  Answer: Very slim!  If the difference in death benefit is of any concern to anyone, just how much does $88,000 of Ten-Year Term Insurance cost on a 25-year-old?  So little that I don’t know of an insurance company that will write such a small amount!  Again, if this is of concern, then Twin “B” should buy $250,000 of term insurance that is convertible to whole life.  It is extremely inexpensive at that age.

Notice that the death benefits are equal at year 22, their age 47.  The probability of death is still very remote at this point, but “B” has more cash value for “banking” purposes.

Now, look at the death benefit at year 61 – their age 86.  The probability of death has increased significantly.  Both twins have paid in the same amount of premiums, but the death benefit is better for twin “B” – and he has had significantly better cash values throughout the entire period.  Which had you rather have – the large number or the small number?

Remember, we are solving for “banking” qualities – not death benefit.  Twin “B” can have earlier and greater access to money for financing things like automobiles, etc. and can direct the interest that otherwise would be paid to banks and finance companies to his own system.  This is the heart of what banking through life insurance is all about.

Refer to the scale on page 38 and you can visualize what has happened when “B” paid $1,200 to the Ordinary Life policy and added a Paid-Up Additions rider of $800 to it.  This action moved the resultant policy towards the left on the scale.  If he changed the ratio of base policy and the PUA rider to, say $800 Ordinary Life and $1,200 PUA rider – then it would move the resultant policy further to the left – and the performance of it would increase even better than what we have illustrated in this exercise.

Now I hope you understand why, for banking purposes, it is best to emphasize cash value accumulations and de-emphasize the death benefit.  It provides more cash for banking and, ultimately, will produce more death benefit than any other way.

Before we leave the subject of creating the entity a question will invariably come up, “Can the premiums paid to create this ‘banking system through life insurance’ be a tax-deductible item?”  Absolutely not!!  You would not want it to be, if you think the matter through.  If it were you would have the IRS looking over your shoulder and telling you what you can and can’t do – as well as changing its mind at every turn of events. You want this entity to be yours and you want absolute control.

Remembering that we all operate from a paradigm – there is abundant evidence of a mental paralysis that controls the predominant thought pattern of most Americans today.  Everything that involves financial matters seems to invoke the question of tax deductibility.  We need to go back to the origin of the IRS to make sense of it all.

Income tax, as we know it today, started in 1913.  Before that time there were surpluses in the national budget.  And when the average citizen discovered that he could now vote himself a benefit – and send the bill for it to all the other citizens – the mess that we have today is the natural result.

I’m quite sure that no one has ever read the IRS Code – it is simply too voluminous.  And if one did, that person would be in a complete stupor afterward.  No one understands the monster.  Give your tax information to ten IRS employees and ask them to compute your tax and I feel sure that you will get eleven different answers!

But, most everyone in the financial services business is familiar with a publication called Tax Facts.  It is a compilation of questions and answers as to how the IRS Code treats certain situations.  Pick up a copy of it and try this exercise:  At random, pick out ten questions and read the answers to them.  You can rest assured that you will come away with the conclusion that the IRS thinks they own everything, but under certain circumstances they will grant you an exception to their rule.  Their game plan is to make a slave out of you, and if you get hooked on their exceptions, you will become one.  Your ability to think will have disappeared and you will then believe that your blessings in life come from the IRS of the US Government.

Most of the tax-deductible items that citizens are “hooked” on involve retirement plans or something of that sort.  Up until World War II pension plans and retirement plans were pretty much non-existent.  The same can be said of health insurance plans.  During the war wages were frozen and the “progressive” income-tax rates peaked out, as best I can remember, at 90%.

So, this raises a question: “How can you give an employee a “raise in pay” without giving him “a raise in pay?”  Answer: Give him a “benefit.”

This seems to be how the whole mess got started.  Corporations gave their employees retirement plans and health insurance plans and Unions started using these as bargaining points.  This only applied to employees of corporations.

Sometime later, sole proprietors and partners agitated for “their share of the loot.”  Their rationale ran something like this: “You blessed the corporate employees, but what about us?  Bless us, too!”  And so, they created HR-10 Plans (Keogh Plans) and allowed them to contribute $2,500 per year into them.  The partners and sole proprietors agitated further, and the contribution was raised to $7,500.

Still later, the every-day person made an observation: “You blessed the corporate folks, and sole proprietors and partners – what about us?  Bless us, too!”  And so, they created IRAs!   Now, everybody was included in the deal.  One of the points made to Congress for doing so was that the capital base in America was eroding – people were not saving enough.  If we give them a tax-deduction this will give them an incentive to save more.   Can you predict what happened to the savings rate?  Right!!  It went down because “Joe, six-pack” reasoned, “Now, I don’t have to save so much because of the tax deduction, and I can take the difference and make a down payment on a boat!”

When government creates a problem (read: onerous taxation) and then turns around and grants you an exception to the problem they created (read: IRAs, 401-Ks, et al) aren’t you just a little bit suspicious that you are being manipulated?

Do yourself a favor – get those folks out of your life.  If you play their game, they will make a slave of you and they will steal your money.

In Part III of this course we will look at some practical applications of the concept.