A Disease in the Public Mind: A New Understanding of Why We Fought the Civil War

Home » A Disease in the Public Mind: A New Understanding of Why We Fought the Civil War 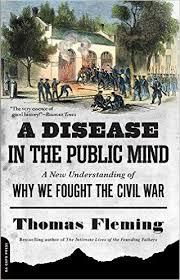 By the time John Brown hung from the gallows for his crimes at Harper’s Ferry, Northern abolitionists had made him a “holy martyr” in their campaign against Southern slave owners.

This Northern hatred for Southerners long predated their objections to slavery. They were convinced that New England, whose spokesmen had begun the American Revolution, should have been the leader of the new nation. Instead, they had been displaced by Southern “slavocrats” like Thomas Jefferson.

This malevolent envy exacerbated the South’s greatest fear: a race war. Jefferson’s cry, “We are truly to be pitied,” summed up their dread. For decades, extremists in both regions flung insults and threats, creating intractable enmities.

By 1861, only a civil war that would kill a million men could save the Union.