Dred Scott’s Revenge: A Legal History of Race and Freedom in America

Home » Dred Scott’s Revenge: A Legal History of Race and Freedom in America 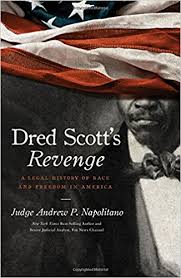 Racial hatred is one of the ugliest of human emotions. And the United States not only once condoned it, it also mandated it?wove it right into the fabric of American jurisprudence. Federal and state governments legally suspended the free will of blacks for 150 years and then denied blacks equal protection of the law for another 150.

How did such crimes happen in America? How were the laws of the land, even the Constitution itself, twisted into repressive and oppressive legislation that denied people their inalienable rights?

Taking the Dred Scott case of 1957 as his shocking center, Judge Andrew P. Napolitano tells the story of how it happened and, through it, builds a damning case against American statesmen from Lincoln to Wilson, from FDR to JFK.