From Bretton Woods to World Inflation 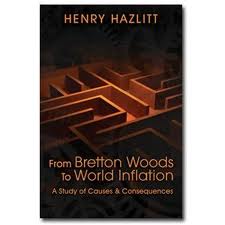 Henry Hazlitt was a leading editorialist for the New York Times from 1934 until 1946. His career at the paper, however, abruptly ended because of the articles collected in this book. He closely covered the Keynesian-inspired Bretton Woods Agreement of 1944, He wrote that the attempt to fix exchange rates and peg world currencies to the dollar which in turn was fixed to gold would not and could not last..

Hazlitt saw that this was not a real gold standard but a complete fake. It did not offer convertibility in a manner that would instill monetary discipline. It trusted governments to maintain a sound money policy with no means of guaranteeing that they would do so. He said, then, that this was not a viable system, and predicted its complete breakdown in time.