The Bubble That Broke the World

Home » The Bubble That Broke the World 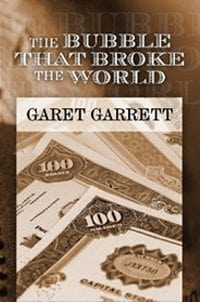 What caused the stock-market crash of 1929 and the Great Depression that followed?

This book blows away the conventional interpretations, not only in its contents but that the book exists at all. The Bubble that Broke the World was written in 1931. Author Garet Garrett ascribes the crash to the pileup of debt, which in turn was made possible by the Federal Reserve’s printing machine. This created distortions in the production structure that cried out for correction. So what is the answer? Let the correction happen and learn from our mistakes.

Such is the thesis of the great Garet Garrett. But take note: this book was a big seller in 1931. In other words, two years before FDR arrived with his destructive New Deal, ascribing the Depression to capitalism and speculation, Garrett had already explained what was really behind the correction.