The Irregulars: Roald Dahl and the British Spy Ring in Wartime Washington

Home » The Irregulars: Roald Dahl and the British Spy Ring in Wartime Washington 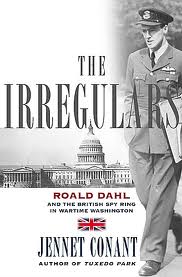 Roald Dahl is famous for his mischievous children’s stories. But as Jennet Conant reports in “The Irregulars,” he was also a British spy. Conant, who has written popular accounts of the secret development of radar and the atomic bomb, shows that Dahl, a former R.A.F. hero, parachuted himself into Washington blue-blood circles in 1942 and used his embassy post to begin spying on Britain’s closest and most important ally.