The Terrible 10: A Century of Economic Folly

Home » The Terrible 10: A Century of Economic Folly 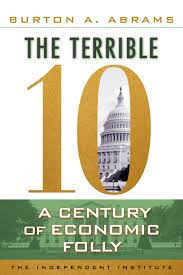 By Burton A. Abrams

The U.S. economy made impressive gains in the 20th century, but this progress makes it easy to forget a harsh reality: Americans were also the victims of disastrous government policies that cost trillions of dollars in wasted resources, created mass unemployment, and kept millions in poverty who otherwise could have participated in the nation’s growing prosperity. Government decision-makers, regardless of political party, have tended to favor short-run benefits for friends while imposing costs on current and later generations. The ten worst blunders divide equally among Democrats and Republicans. The Terrible 10 also provides key lessons to help us avoid repeating such policy mistakes in the future.