A RoadMap For Reopening The Sequestered U.S. Economy

Home » July 2020 » A RoadMap For Reopening The Sequestered U.S. Economy

Experts estimate that we will not have a COVID-19 vaccine until 2021 at the earliest. For the foreseeable future, living with COVID-19 is our new “normal” and one of the main reasons why all businesses in our cities, except those considered essential (groceries, pharmacies, federal and state offices, etc.), have been ordered to close their
locations.

In the city in which I reside, Nashville Tennessee, the “safer at home order” began on March 22, 2020 and it was on that very same day that our city mayor, under the auspices of the Governor of Tennessee, released a preliminary ROADMAP FOR REOPENING NASHVILLE. Even so, the quarantine would remain in place until May 11.

The most significant aspect of this “Roadmap” is to recognize that reopening Nashville businesses will be done in very closely monitored “phases” that must sustain declining trends in new COVID-19 cases for at least 14 days before it will be allowed to go to the next “phase.” Failure to reach the 14 days with the desired results will extend the lockdown provisions of “phase one.” There are a total of 4 “phases.”

Phase one officially began May 11th and shopping traffic on the streets has been dismal. Fear of the virus pandemic continues to keep people away from the downtown area shops, restaurants, hotels, and night-life attractions. Furthermore, phase one does not allow for critical ambiance activities such as “live music” at any of the downtown area stores, and all of the virus social distancing rules are strictly enforced. Even if “phase one” is executed perfectly for the first 14 days required, getting to “phase 4” which removes all the business restrictions, and if executed perfectly for its entire 14-day requirement, will take 56 days or until July, 2020.

In effect, what is generally recognized as Nashville’s primary tourist and selling season has ended suddenly and abruptly in a matter of two months. Many of the businesses in the downtown area of Nashville have filed for bankruptcy and abandoned their highly expensive leased locations. Other high travel destinations such as Hawaii and Las Vegas, have also experienced similar financial problems to those of Nashville and have especially spiked in the month of May, and will most likely do so again in June and July. With now 33 million Americans having filed unemployment claims and the airline industry in serious trouble, 2020 is quickly stacking up as a year for national catastrophic losses.

Nashville is also the home of one of my oldest business clients as well as dearest friends, Ed and Karen Smith. Of course, neither of us can believe what has happened to Nashville in the last two months, much less the rest of the entire world since the Corona virus pandemic.

We became acquainted with each other 22 years ago under similar unusual circumstances. As a workout specialist and “trustee,” I was introduced to the Smith’s by their top five major creditors for purposes of establishing a “Merchandise Trust Agreement” between us in order to resolve their, and the Smith’s, financial difficulties and indebtedness.

Please keep in mind that these agreements were signed and executed during a period of financial instability. In fact, during this period of 1989, the entire western and apparel industry of which they were all a part, was also in financial turmoil. Over this 22-year period of time the Smiths have become very successful Nashville business owners and all of their suppliers have been paid in full. They now own most of the real estate in which they operate their businesses. Financially, Ed and Karen Smith’s enterprise is currently profitable and sound.

Nevertheless, due to Nashville’s ensuing circumstances, the Smiths plan to downsize their entire operation to one or two stores beginning immediately, but will continue to remain open and operational. Due to their business acumen, I am confident they will continue to remain a successful enterprise. The Merchandise Trust Agreements, on the other hand, have fully completed their future need and will disband.

I only wish I could relay the same type of happy news to the millions of many national businesses that have already filed for bankruptcy with no hope of recovery. Unfortunately, this problem is only just beginning for countless others.

Sudden Chaos of the Markets and Major Industries

In the wake of the coronavirus pandemic, it’s as though all hell has broken loose. The sudden chaos of the stock market and the collapse of major industries have made it difficult to capture the impending results on the economy in real-time. Plus, people have been sequestered in their homes and have not been out to meet and talk with each other, consequently they have not realized how much their world has changed. Meanwhile the Federal Reserve has engaged in unprecedented actions, pumping $2.5 trillion into the financial system in just two months.

Meanwhile the hemorrhaging has already started. Besides the stock market’s complete collapse, real-estate, which generally moves much slower, is already at a standstill. As always under these austere measures, the small wage earners, those individuals that basically live from paycheck to paycheck, have already lost their jobs in record numbers. These are the results of the mess this financial crash is spreading everywhere.

So too, the prestigious brick and mortar stores that have been virtually hanging on by their nails, like J.C. Penney, that should have died years ago, finally gave up the ghost and filed for Chapter-XI Bankruptcy. At this juncture it will be a quick process.

Also, the love of my life retailer, Neiman Marcus—I say that because I trained under Stanley Marcus as a college student—it too has filed for Chapter XI Bankruptcy. Lord & Taylor and J. Crew are also on the list as having filed. Nordstrom and Macy’s, while still alive and breathing for now, have shuttered hundreds of stores. And this is all just the beginning of more to come.

In a special 60 MINUTES news segment Scott Pelley of CBS news asked Jerome Powell, Chairman of the Federal Reserve an important question. Pelley asked, “When does the economy recover”? Powell said that it was “very difficult to answer because it really depends to a large degree, on what happens to the coronavirus. The sooner we get the virus under control, the sooner businesses can recover. And more important than that, the sooner people can become confident that they can resume certain kinds of activity. Going out, going to restaurants, traveling, flying on planes, those sorts of things. So that’s really going to tell us when the economy can recover.”

Again, Pelley asked, “What economic realities do the American people need to be prepared for?” Powell’s response was more realistic than even he realizes. “This is a time of great suffering and difficulty. And it’s come on us so quickly and with such force, that you really can’t put onto words the pain people are feeling and the uncertainty their realizing. And it’s going to take a while for us to get back…Twenty million people have lost their jobs…It’s women to an extraordinary extent, who were making less than $40,000 per year, almost 40% have lost their jobs in the last month or so. Extraordinary statistic. So that’s who’s really bearing the brunt of this.”

In response to a push notification that Pelley had just received on his phone: “Dow tanks more than 500 points in Wall Street sell-off, after Fed chair warns economic recovery will be prolonged and bumpy.” To which Pelley exclaimed to Powell, “You knew that was coming.” And Powell looking rather flattered, simply said: “I’ve been watching the markets.” What? I thought. You have been watching the markets? And, I couldn’t help but to laugh out loud.

I am attempting not to minimize the dangers of the virus and the hundreds of thousands of people it has killed, however, in all honesty, Bob and I have been watching the markets for years and I have personally experienced several financial crises myself. But this particular financial crisis we knew was coming and we also knew that it would be bigger and more catastrophic than the 2008 crisis. In fact, we talked about it in detail in September 2016 in our live stream video presentation, “How to Weather the Coming Financial Storms.” Furthermore, we were very confident that it would happen this year. Keep in mind that all financial crises are ignited by some catalyst of one kind or another. What we did not know was that a virus pandemic would set this one off.

This is what knowledge of the business cycle teaches you, it’s what the Austrian School of Economics teaches you. Unfortunately, Keynesian Economics and the Federal Reserve don’t teach you anything no matter how often they watch the markets. They are always the culprits that cause all financial crisis. It’s our great hope that people will
finally figure this out.

In this section I reproduce some statebased data from the Bureau of Labor Statistics (BLS). Readers can find it at: https://www.bls.gov/news.release/laus.nr0.htm

“Unemployment rates were higher in April in all 50 states and the District of Columbia, the U.S. Bureau of Labor Statistics reported today. Similarly, all 50 states and the District had jobless rate increases from a year earlier. The national unemployment rate rose by 10.3 percentage points over the month to 14.7 percent and was 11.1 points higher than in April 2019.” This was reported May 22, 2020 by an economic news release put out by the U.S. Bureau of Labor Statistics.

Nevada had the highest unemployment rate in April at 28.2 percent. Hawaii was at 22.3 percent. Nevada exceeded its high by 10.00. Connecticut had the lowest  unemployment rate at 7.9 percent. As has been made clear already, these are high tourist cities that have been seriously affected by the coronavirus.

Once again, these are all statistics that have the latest available numbers and are depicting the effects of the virus pandemic. They will jump again next month and possibly once again the next month after that. If the coronavirus cases continue to climb it is highly unlikely that the fear of the virus can be relieved enough to stimulate the economy back to life. Too many people are still very afraid of what has happened. 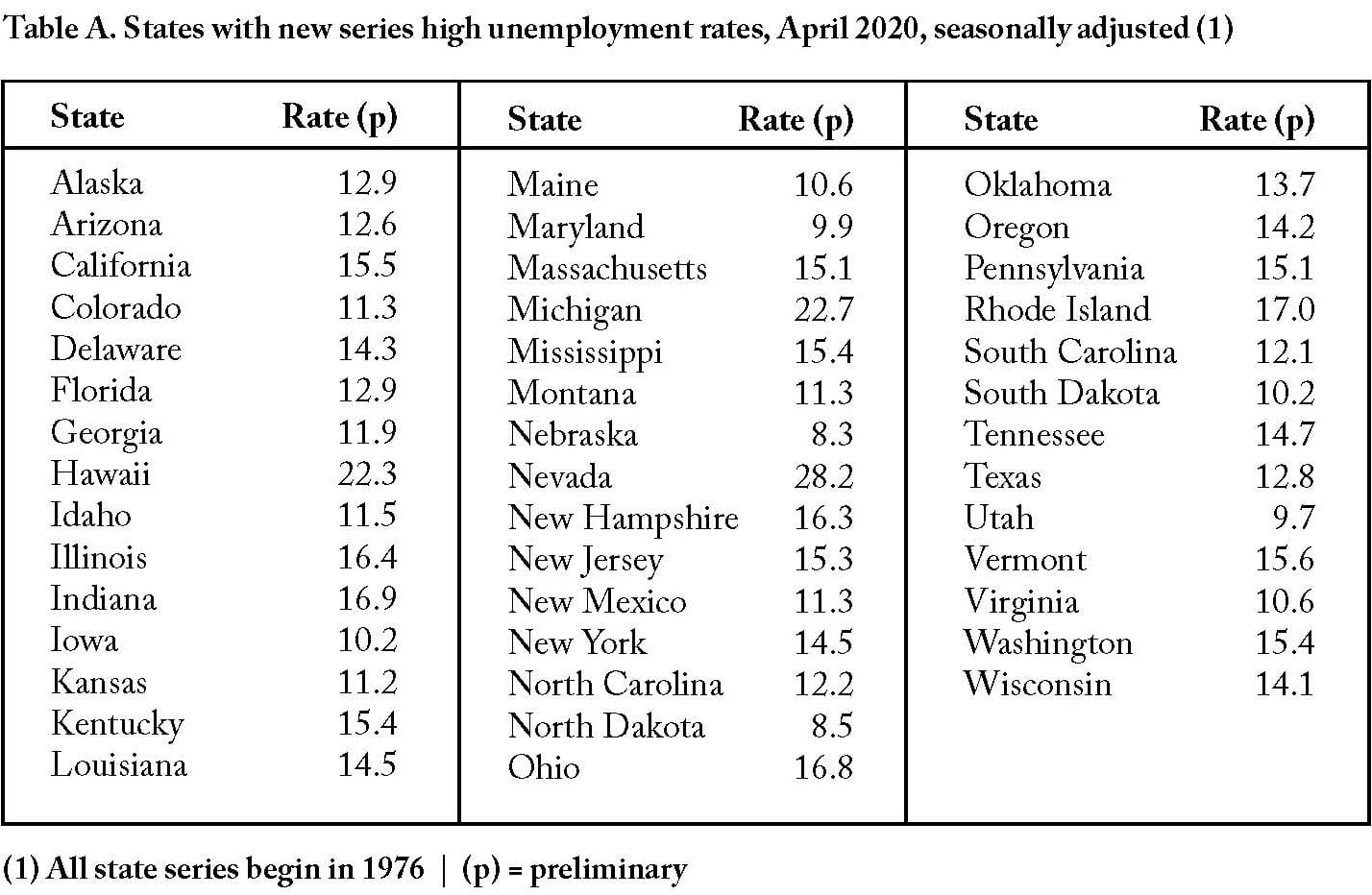 Only recently have businesses been allowed to open their doors to the public. Each state has laid down their own rules for reopening. Nevertheless, each state is carefully monitoring its death tolls from the coronavirus. If the death toll does not subside a state could be forced into a lockdown closed condition once again. This becomes the kiss of death for the economy to recover. Once they collapsed the economy in the manner they did, it will become very difficult to go back to where we once were. Finding a vaccine quickly is the only definitive cure.

Unfortunately, experts estimate that we will not have a COVID-19 vaccine until next year at the earliest, and some warn that one may never come. For the foreseeable future, living with COVID-19 is our new “normal.” Readers need to adjust to this reality in all aspects of their lives. Regarding their finances, we urge more than ever to consider Nelson Nash’s Infinite Banking Concept (IBC) and to read more in Austrian economics, in order to make sense of the unfolding economic disaster.

This article was originally published on Lara-Murphy.com. Read the original article.
View All BankNotes Articles
×