Thanks, Janet Yellen: Homeownership in US Falls to 25-Year Low

Home » January 2016 » Thanks, Janet Yellen: Homeownership in US Falls to 25-Year Low

However, in recent years, years of federal stimulus and accommodative Fed policy has done a terrible job of making housing more affordable. In fact, thanks to the Fed’s efforts to prop up asset prices, housing has become exceptionally unaffordable as both rents and home purchase costs have risen to new highs and outpaced wage growth.

Let’s look at some of the stats that provide some indicators of the Fed’s legacy in recent years. 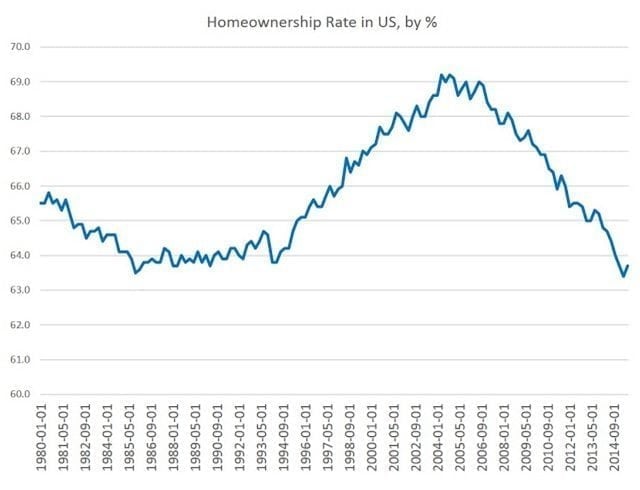 So why are home ownership rates falling so rapidly? Some of it is simply due to the fact that home prices have climbed out of reach of many families. According to the Case-Shiller 20-city composite index, year-over-year home price growth has been up year-over-year for the past 39 months, and for most of that period has exceeded five percent growth.
(Note: for the sake of consistency, none of the numbers discussed below are adjusted for inflation.) 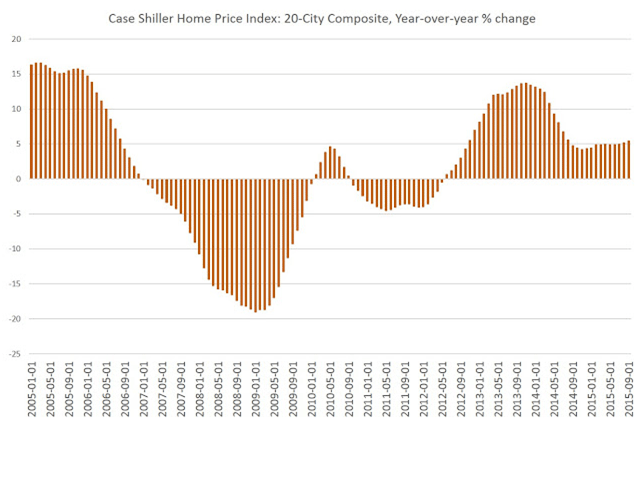 By another measure, (the FHFA expanded-data index) quarterly home price measures have been up year-over-year for the past 14 quarters, with growth exceeding five percent for the past 12 quarters: 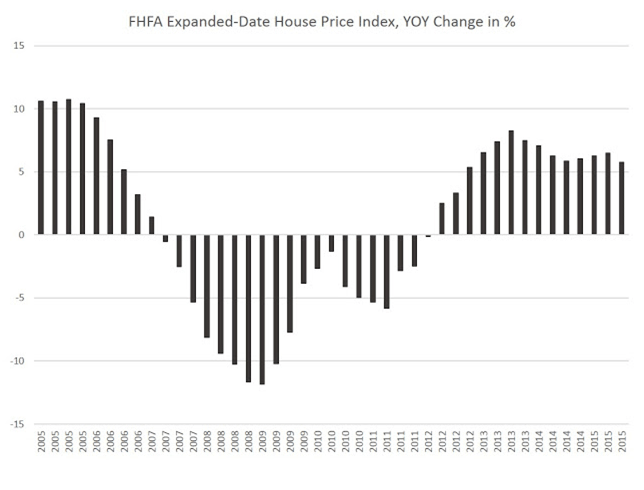 For people who already own real estate, this doesn’t necessarily present a problem. Those who already own houses will sell their houses at the new higher prices before buying a new one. For first-time buyers, on the other hand, continually increasing prices presents a problem. And this is even true in an age of easy money.

While there was a significant tightening of lending standards from 2009 to 2012, standards have continually loosened over the past two years. So while it’s still not as easy to get a home loan as it was during, say, 2005, its still getting easy to get a loan even if one doesn’t have money for a meaningful down payment, and has few assets. Indeed, sub-prime lending is making a quick comeback as Washington, DC turns the screws on banks to keep the money flowing.

The need to keep the easy money flowing stems from these relentless increases in home prices. If asset prices continue to climb, the thinking goes, we just need to keep shoveling more money to borrowers to get them in a house. And then, once they have a house, they’ll spend a bunch of money and the economy will take off.

Unfortunately for the borrowers, however, this line of thinking means that the next time a recession comes along, they’ll quickly become underwater on their home loans and find themselves trapped. The drive toward low down payments and subprime lending makes it far more likely that borrowers will find themselves with a house they can’t sell for as much as they owe. Or, the homeowner may simply continue living in a home where he’s making payments based on inflated values.

For borrowers who milk the system and just “walk away” from their homes, that’s no big deal. The ones who will be punished the most, however, will be the people who play by the rules and try to make good on their mortgage payments. Yes, the lenders will suffer too, but they’ll get bailed out courtesy of the taxpayers. The borrowers won’t be so lucky. 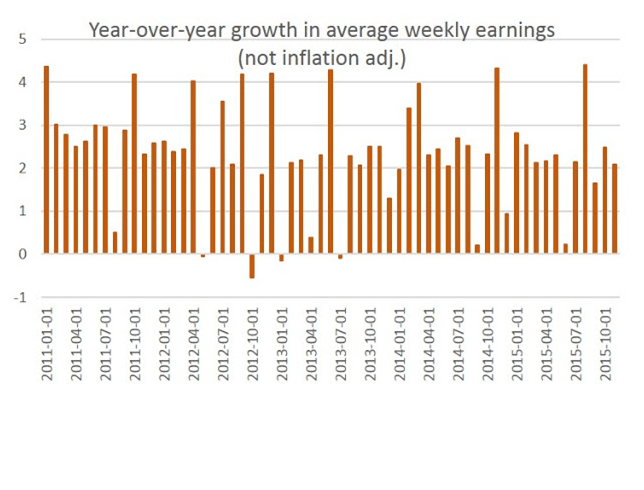 If your earnings are only increasing at a rate of two to three percent while home prices are increasing to a tune of 4 percent to ten percent, things aren’t looking good for you. 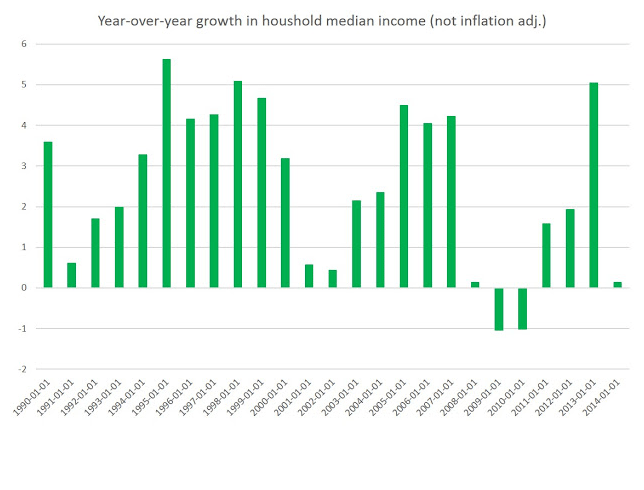 As home prices outpace wages, people who resort to more debt to afford a house. We’ve seen this movie before.

And what if buying a house is just totally out of reach? They can just rent a house or an apartment right?

Well, it’s getting harder and more expensive to do that, since, we we’ve seen in recent years, the vacancy rate nationwide has fallen to a twenty year low: 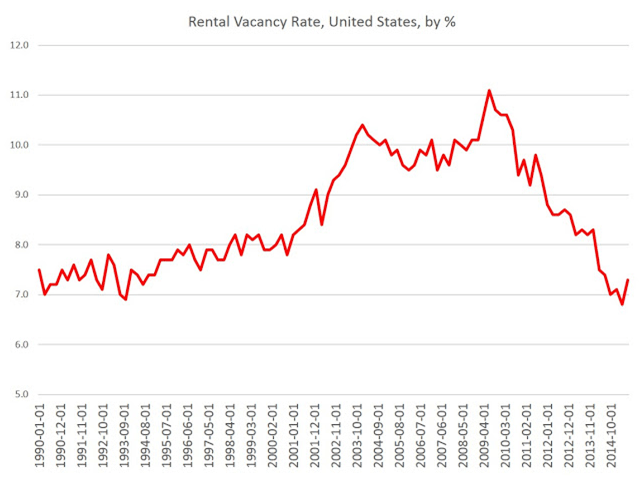 As home buying becomes less economically attractive, vacancies in rental units go down. And this tends to then drive up rents, although sluggish wage growth will often somewhat limit rent growth. So, not surprisingly, rent growth appears to heading back up to where it was before the 2008 financial crisis. Rent growth, according to the Census Bureau’s rent measure, topped six percent during the second and third quarters of this year. Clearly, wages aren’t keeping up with rent either (y axis = % change): 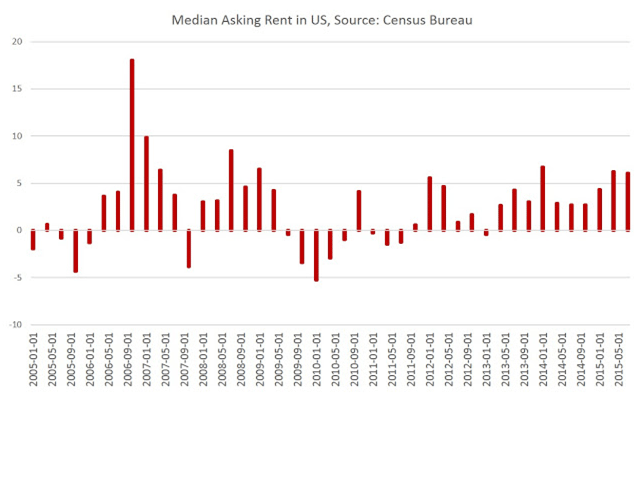 Naturally, it makes sense that rents should increase as home prices increase. Rental homes and owner-occupant homes are, after all, substitute goods. You’re unlikely to see the price of hot dogs double, for example, without seeing an increase in the price of hamburgers as well.

At times like these, REALTORS® and home builders like to talk about how there’s never been a better time to buy because rent growth will simply increase the demand for home ownership. After all, you may be able to get yourself into a mortgage where the monthly payment is lower than monthly rent.

That’s swell for people who can pull that off, but it’s likely that affordability is still a significant issue for many households. If it weren’t, it’s unlikely the home ownership rate would be falling so quickly.

Late last month, Janet Yellen testily responded to an open letter from Ralph Nader who pointed out that Yellen’s policies were hurting middle- and low-income savers and investors. Yellen retorted that the Fed had rescued the economy “by making consumer purchases more affordable.”

Which consumer goods to which she was referring remains unclear, but given that housing is usually a person’s single largest expense, it’s hard to see what’s getting “more affordable.” Moreover, in spite of Yellen’s crowing about job growth, her policies have also worked to drive down real wages since purchasing power isn’t exactly going up if housing costs go up month after month.

In truth, the Fed has little interest in the affordability of homes to ordinary people. Fed policy is really being driven right by a determination to prop up asset prices for the sake of the big banks’ portfolios. If home prices collapse, so will the values of many banks’ assets, along with the portfolios of the Fed’s Wall Street cronies.

Comment by R. Nelson Nash – It still amazes me that nowadays the accepted definition of “home ownership” is when a person has title to a house – but has a mortgage (lien) that exceeds the value of it! That is an absurd concept. One doesn’t own something until there is no debt against it.