At the Highest Levels: The Inside Story of the End of the Cold War

Home » At the Highest Levels: The Inside Story of the End of the Cold War 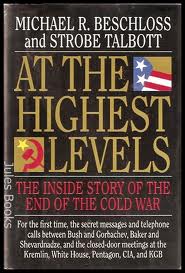 By by Michael R. Beschloss and Strobe Talbott

This is a story that you did not read in the newspapers. At the Highest Levels reveals a hitherto secret dimension of the most momentous event of our time: the end of the Cold War. Beschloss and Talbott show us the vital transactions that George Bush and Mikhail Gorbachev made and concealed from the world: Bush’s pledge not to press Gorbachev for Baltic independence, the manipulations for German unification, how the Soviet Union joined the Gulf War coalition, Bush’s private warnings to Gorbachev that he was about to be overthrown, and the U.S. president’s secret efforts to prevent the breakup of the Soviet Union and keep Gorbachev in power.