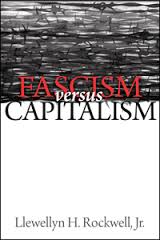 “Fascism” has become a term of general derision and rebuke. It is tossed casually in the direction of anything a critic happens to dislike.

But fascism is a real political and economic concept, not a stick with which to beat opponents arbitrarily. The abuse of this important word undermines its true value as a term referring to a very real phenomenon, and one whose spirit lives on even now.

Fascism is a specific ideology based on the idea that the state is the ideal organization for realizing a society’s and an individual’s potential economically, socially, and even spiritually.

The state, for the fascist, is the instrument by which the people’s common destiny is realized, and in which the potential for greatness is to be found. Individual rights, and the individual himself, are strictly subordinate to the state’s great and glorious goals for the nation. In foreign affairs, the fascist attitude is reflected in a belligerent chauvinism, a contempt for other peoples, and a society-wide reverence for soldiers and the martial virtues.

Lew Rockwell, in this new volume, examines the starkly contrasting systems of capitalism and fascism, noting pro-fascist trends in recent decades as well as the larger historical trends in the United States and internationally.