Gandhi & Churchill: The Epic Rivalry that Destroyed an Empire and Forged Our Age

Home » Gandhi & Churchill: The Epic Rivalry that Destroyed an Empire and Forged Our Age 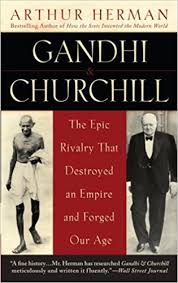 In this fascinating and meticulously researched book, bestselling historian Arthur Herman sheds new light on two of the most universally recognizable icons of the twentieth century, and reveals how their forty-year rivalry sealed the fate of India and the British Empire.

They were born worlds apart: Winston Churchill to Britain’s most glamorous aristocratic family, Mohandas Gandhi to a pious middle-class household in a provincial town in India. Yet Arthur Herman reveals how their lives and careers became intertwined as the twentieth century unfolded. Both men would go on to lead their nations through harrowing trials and two world wars—and become locked in a fierce contest of wills that would decide the fates of countries, continents, and ultimately an empire. Here is a sweeping epic with a fascinating supporting cast, and a brilliant narrative parable of two men whose great successes were always haunted by personal failure—and whose final moments of triumph were overshadowed by the loss of what they held most dear.