The Great Betrayal — The General Welfare Clause of the Constitution

Home » The Great Betrayal — The General Welfare Clause of the Constitution 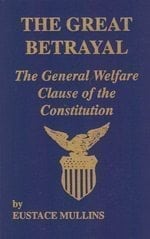 This is the story of the Great Betrayal. During the twentieth century, Americans increasingly have become inured, even desensitized, to the continuous accusations, testimony, and public hearings which have detailed the many betrayals of our Republic. Why have there been so many betrayals, rather than one calamitous act of treason? The history of this century has borne out the strength of the admirable edifice which was reared up by our Founding Fathers. They included in it so many safeguards, so many far-sighted defenses, so many shields for the security of the succeeding generations, that no single act of conspiracy could bring it down.