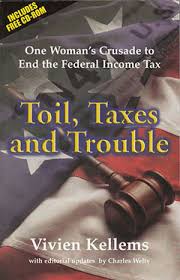 In her 1952 book, Toil, Taxes and Trouble, Kellems explained that her rebellion was based on constitutional grounds. Article I Section 2, Clause 3 of the U.S. Constitution declares, “Representatives and direct taxes shall be apportioned among the several States . . . according to their respective Numbers. . . .” Section 9, Clause 4 states, “No capitation, or other direct, Tax shall be laid, unless in proportion to the Census or Enumeration. . . .”
Kellems concluded, “[O]ur forefathers bound fast the hands of Congress and secured the liberty and freedom of the American people. How? By making it utterly impossible to levy an income tax. An income tax is certainly a direct tax [which] must be paid by the person receiving the income. By specifying that direct taxes must be levied in accordance with the number of people, not upon what they produced, as in the days of ancient Egypt, an income tax was simply out of the question.”