Against the State: An Anarcho-Capitalist Manifesto 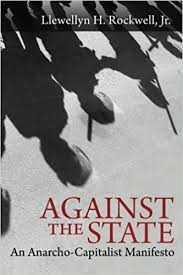 Against the State: An Anarcho-Capitalist Manifesto diagnoses what is wrong with the American political system and tells us what we need to fix things. The cure is a radical one because, as the book incontrovertibly shows, the many problems that confront us today are no accident. They stem from the nature of government itself. Only peaceful cooperation based on the free market can rescue us from our present plight.

Against the State is written by Lew Rockwell, the founder of the Mises Institute and LewRockwell.com, and the closest friend and associate of Murray Rothbard, the leading theorist of anarcho-capitalism. Rockwell applies Rothbard’s combination of individualist anarchism and Austrian economics to contemporary America. The book shows how the government is based on war, both against foreign nations and against the American people themselves, through massive invasions of our liberties. Fueled by an out-of-control banking system, the American State has become in essence fascist. We cannot escape our predicament through limited government: the government is incapable of controlling itself. Only a purely private social order can save us, and Rockwell succinctly sets out how an anarcho-capitalist order would work.