R. Nelson Nash on Becoming Your Own Banker 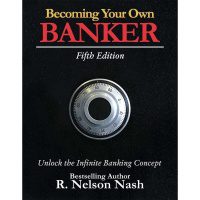 Becoming Your Own Banker© is a text for a ten-hour course of instruction about the power of dividend-paying whole life insurance. It is not a sales tool for life insurance agents.  It is education that the life insurance industry should have taught during the last 200 years. Unfortunately, the industry has concentrated on the death benefit qualities of the contract and has neglected to adequately describe the financing capabilities that it presents for the policy owners.  Ironically, life insurance companies must put premium income to work in various investments in order to pay the death claims.

This book demonstrates that your need for finance, during your lifetime, is much greater than your need for protection.  Solve for this need through this instrument and you will end up with more life insurance than the companies will issue on you.  Most everyone is familiar with the fact that one can borrow from a whole life policy, but because of how little premiums they pay, there is limited access to money to finance major items needed during a lifetime. Yet, the need for financing for the typical person is extensive.  Really, all this book adds to the equation is scale.

The fact that the principles have been there all along and no one taught them to me makes me rather angry! Had I known them, life would have been much simpler and much more profitable. Someone should have recognized them and taught them long ago, but this didn’t take place because of the mindset that predominates in the entire financial world.

It is written for the layman, not for financial advisors, but all life agents should be thoroughly knowledgeable of its content and practice.  Again, unfortunately, this is not the case.  Very few of them have more than a rudimentary understanding of its qualities.

The whole idea is to recapture the interest that one is paying to banks and finance companies for the major items that we need during a lifetime, such as automobiles, major appliances, education, homes, investment opportunities, business equipment, etc.

A word of caution is in order — later in the book you will be looking at illustrations of life insurance policies that show how the concept works as compared with how most folks go about solving their financial affairs.  Most of the illustrations were developed in 2000 and represent dividend scales in effect at that time.  Presently, interest earnings are lower and, hence, dividend scales are lower.  But in comparison with other methods of financing the things of life, the difference in results remains the same.

It is not a procedure to “get rich quickly.”  To the contrary, it requires long range planning.  I’m educated as a forester, having worked in that field as a consultant for ten years; I tend to think seventy years in the future.  I won’t be here — and neither will you — but there is no reason not to behave in this manner.  “Plan as if you are going to live forever and live as if you are going to die today” appears to me to be a good thought.  One can learn how to plan and act inter-generationally. That’s one of the primary advantages of having been a forester.  I learned to think beyond the lifespan of my current generation.

Becoming Your Own Banker© is not a tax-qualified idea of any sort.  The Income Tax Law, as we know it today, has only been around since 1913.  Life insurance has been around for over 200 years and is not a creature of any tax code.  It is nothing more than like-minded people contracting with one another to solve a financial problem.

There is no such thing as “having too much money in the bank.”  Wealth must reside somewhere. What better place to have it reside than here? From this residence one can do anything that one can conceive. This is an advantage that most folks ignore in their thought process, and therefore, limits their effectiveness.

Let me make it abundantly clear—I am not talking about a bank in the conventional sense of the word.  I am demonstrating that one can use dividend-paying whole life insurance to solve one’s need for finance throughout one’s life.

Hopefully, this book will give you a new perspective on the idea of “retirement.”  I prefer to use the words, “passive income.”  That is money coming in that you can count on and you don’t do anything to earn it at that time.  Study the illustrations carefully and you will see that very high premium, dividend-paying, whole life insurance is the ultimate vehicle to produce such income.

The Infinite Banking Concept© is a major paradigm shift for most folks. It will require several thorough readings for a full understanding of its message.  The concept is not complicated, it is just different from the way the majority thinks and behaves.  In fact, it is the ultimate in simplicity. There is an extensive reading list on this site, and you are encouraged to read them all.  Education is an on-going process and there is no such thing as having “arrived” in knowledge.

There have been many people that have had a glimpse of what this book is all about but none, to my knowledge; no one has put together a comprehensive rationale such as you will see here. Read it with an open mind and you will discover a whole new financial world.