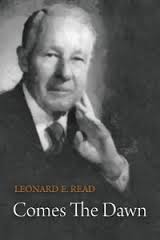 Libertarians may seem few and far between today, but they are not nearly as isolated now as they were when Leonard Read (1898-1983) was working to spread the freedom philosophy. Yet, although Read saw socialism spreading all around, he knew it was a “surface phenomenon”, and that under the surface, the liberty movement was growing. This gave him the hope for the future that he needed to keep at his mission in life. Working with such giants as Ludwig von Mises and Henry Hazlitt, Read, through his Foundation for Economics Education helped lay the groundwork that modern libertarians are building upon today. After decades of honing his craft, this master educator (author of the classic essay “I, Pencil”) sat down to restate the case for liberty, and expose what he called “authoritarian fallacies”, as best he could. The result was 25 powerful essays that were all but lost until recently. Now they can pass with ease from one electronic device to another.