Hidden History: The Secret Origins of the First World War 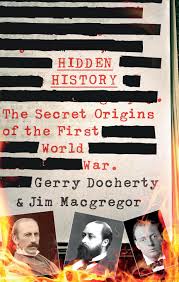 Of the many myths that befog the modern political mind, none is so corrupting of the understanding or so incongruent with historical fact as the notion that the wealthy and the powerful do not conspire.

They conspire continually, habitually, effectively, diabolically and on a scale that beggars the imagination. To deny this conspiracy fact is to deny both overwhelming empirical evidence and elementary reason.

Nevertheless, for the astute observer of the ‘Great Game’ of politics, it is an unending source of wonderment to stumble across ever more astounding examples of the monstrous machinations of which wealthy and powerful elites are capable. Indeed, it is precisely here that authors Docherty and Macgregor enter the fray and threaten to take our breath away entirely.