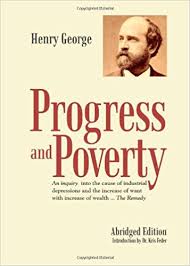 Henry George (1839-1897) was an American political economist and the most influential proponent of the “Single Tax” on land, also known as the land value tax. He inspired the philosophy and economic ideology known as Georgism, that holds that everyone owns what they create, but that everything found in nature, most importantly land, belongs equally to all humanity. He was the author of Progress and Poverty, written in 1879. His other works include: Our Land and Land Policy (1871), The Irish Land Question (1881), Social Problems (1884), Scotland and Scotsmen (1884), Protection; or, Free Trade (1886), Science of Political Economy (1897) and The Crime of Poverty (1910).