The Wars of the Roosevelts: The Ruthless Rise of America’s Greatest Political Family

Home » The Wars of the Roosevelts: The Ruthless Rise of America’s Greatest Political Family 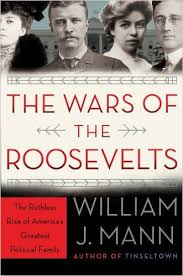 Drawing on previously hidden historical documents and interviews with the long-silent “illegitimate” branch of the family, William J. Mann paints an elegant, meticulously researched, and groundbreaking group portrait of this legendary family. Mann argues that the Roosevelts’ rise to power and prestige was actually driven by a series of intense personal contest that at times devolved into blood sport. His compelling and eye-opening masterwork is the story of a family at war with itself, of social Darwinism at its most ruthless—in which the strong devoured the weak and repudiated the inconvenient.