There’s Nothing Natural About Socialism

The socialist idea has many forms and flavors; however, one can observe three main paths toward socialism. They are the socialization of the means of production, wealth redistribution, and collectivization of consciousness. Different socialist movements use these three approaches to varying degrees.
Orthodox Marxists and Marxist-Leninists consider outright expropriation of private property as the primary way toward a socialist society. Italian Fascists and German National Socialists allowed de jure private property, but established de facto total control over all spheres of economic activities. The subjugation of the individual to the collective, which is collectivization of consciousness, and wealth redistribution were their preferred paths toward socialism. In all of these cases, though, we find totalitarianism is a common denominator, and the most odious regimes of the 20th century utilized collectivization of consciousness to the fullest degree.

Social democracy, or democratic socialism, as it has become known in the US, chose a middle path. Evolutionary socialists have not explicitly called for the expropriation of private property, nor they have advocated for the establishment of a totalitarian state. On the contrary, they have been supporting democratic institutions and private enterprises, especially while being in opposition. Their modus operandi is to gradually undermine capitalism from within and portray this process as a natural development of human society.
The world wars played a crucial role in establishing social democracy as the main force of the left in post-industrialized countries. Thus, fascism, national socialism, and communism had discredited themselves in the eyes of the majority of people. The former two were burned in the flames of WWII; the latter was suffocated during the Cold War. Thus, left had a clear winner: social democracy. Anarchists, syndicalists, and the residue of Marxists and fascists had not played a significant role in the political life of Europe and North America. Instead, they acted the part of a scarecrow which reminded everyone: “better me (mild socialism) than them.”

The philosophical basis of social democracy is the Kantian concept of the self-integrity of the human person from which — they claim — follows ethical justification for socialism. Democratic socialists call for economic equality as a moral principle and seek to gain it through the mechanism of wealth redistribution. Numerous social programs are fueled by wealth redistribution that society ought to support according to the highest moral standards. As soon as a new social-oriented idea finds its way into the law of the land, the next generation of people will consider it as a given and will not even suspect that it was possible to live without those rules. Moreover, it will become almost impossible to roll back some socialist-style laws. For example, the idea of the abolishing of the Social Security Act would be considered absurd by many.

The socialist doctrine based on superior morality has steadily penetrated governments, academia, media, and international institutions over the years. Socialism was being injected in small doses by invoking ethical arguments of the highest degree for the benefit of some groups or individuals or human society as a whole. The key to the success of evolutionary socialism has been its gradualism and steadiness. It has helped to mask socialist transformations as continuous improvements to human society due to the acceptance of ever-higher moral qualities and the defense of noble causes. For example, the contemporary left utilizes a desire to “save the planet” as a pretext to inject even more socialism into the body of free societies.

It’s Not a Natural Evolution

The 20th century was the century of spending. All developed countries exhibited a steady growth of social spending from virtually zero at the end of the 19th century up to a maximum of almost 32% GDP, as was the case in France, illustrated in Pic. 1. 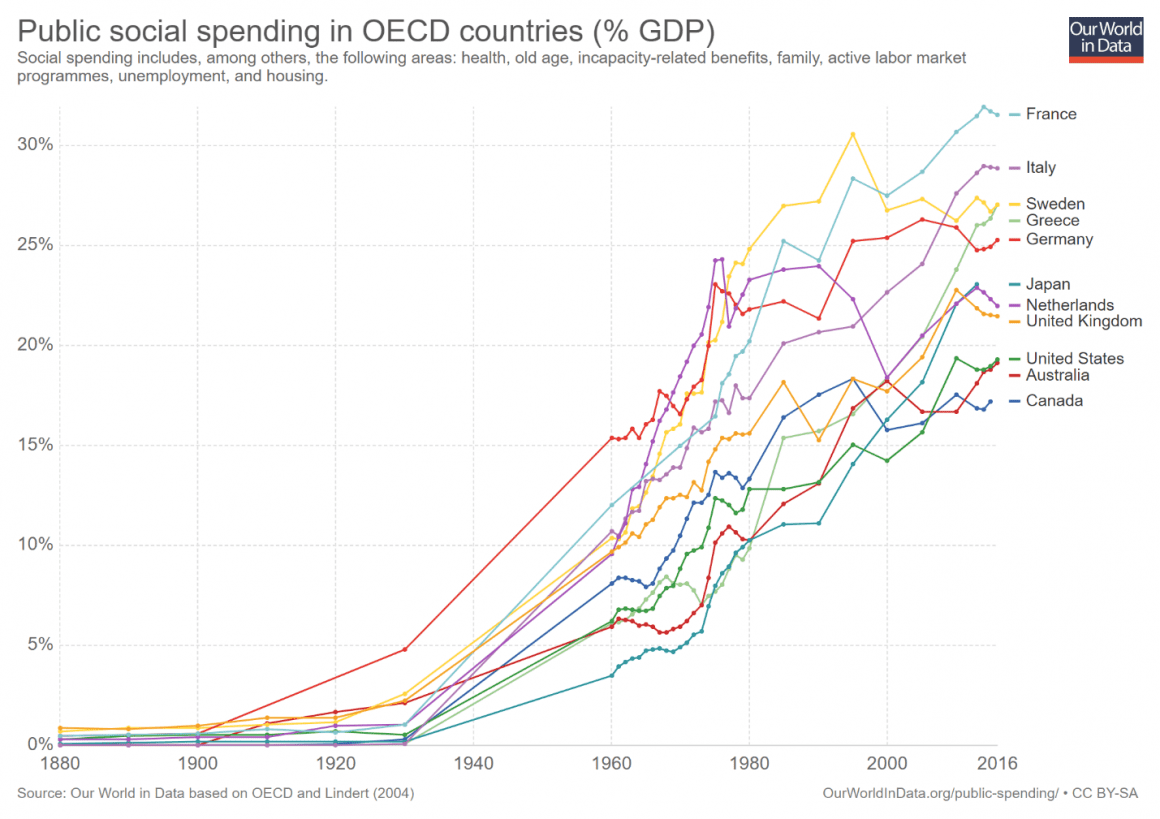 The international bureaucracy, in reviewing the picture, sees a trend of “progress,” the positive changes in society, and the only rational way of human development. However, proponents of economic libertarianism see, as the poet said, “the other side of the rainbow”: the gradual assault on capitalism and the injection of socialism which are camouflaged as actual evolutionary progress. So far, socialists have managed to falsely persuade people that a socialist transformation is a natural form of human evolution.

But it is not. On the contrary, democratic socialism requires constantly intervening in the free choices of human beings in the marketplace.
Nonetheless, the notion of wealth redistribution is the central tenet of democratic socialism, so these socialists become more concerned about the centrally-planned redistribution of wealth rather than the production of wealth. And this illustrates the main difference between free economies and socialist-planned economies. Socialists want to redistribute wealth in a manner fitting to government planners. But advocates of free choices seek to allow free individuals to distribute resources through the marketplace — where wealth is built in proportion to how much one serves others. The democratic socialists are committed to breaking that naturally-occurring and proportional system through wealth redistribution which is in essence a latent and continuous expropriation of private property.

Consequently, democratic socialism is dangerous like other flavors of socialism and does not constitute a natural development of human society. On the contrary, it is an artificial construct that leads nations into an evolutionary dead end. All countries that practiced socialism of various flavors have never achieved economic equality but rather a sameness in their misery. The history of ex-Soviet republics shows that the only way out of poverty and moral decadence is embracing capitalism again.